My First Trip to The MoMA 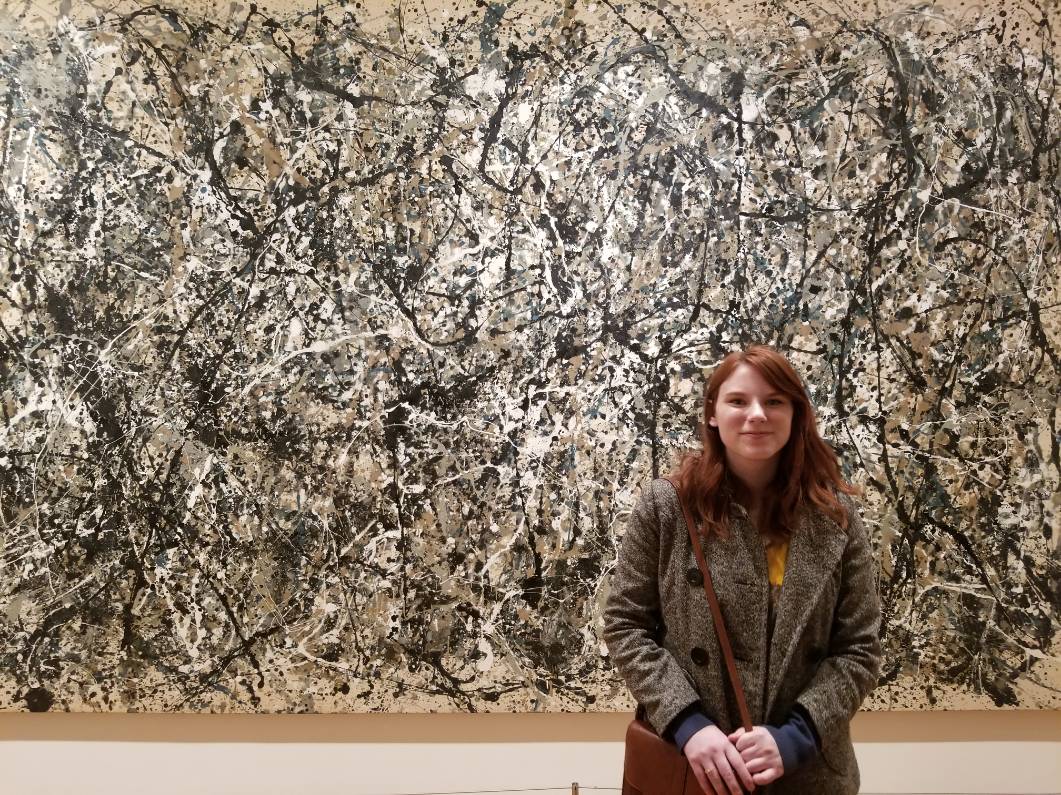 My favorite museum experience was my first trip to The MoMA. It was nostalgic, overcrowded, and some how perfect.

When I was a little girl, I remember my favorite book was Olivia by Ian Falconer. It’s about a young pig that was unapologetically herself. In the book, her mom would take her out to the beach and read her stories. It was truly pure and delightful. When I was younger, there was a moment in the book that stuck out to me and continues to stay with me to this day. Olivia and her mom took a trip to The Museum of Modern Art (MoMA). She fell in love with Edgar Degas’s impressionist work with ballerinas and spent particularly a lot of time with Jackson Pollock’s Number 5. The joke in the book was that she thought anyone could splatter paint like Pollock, so she tried to recreate it on her bedroom wall once she got home. Since reading the book as a young girl, this painting held a special significance for me. I was overwhelmed and frankly over the moon to finally visit it last Friday.

After moving to Philadelphia nearly five years ago, I realize I must be crazy to only now visit The MoMA. We packed our umbrellas and drove to New York in the pouring rain. It wasn’t the ideal day to visit — especially because it was a free-admission day. When we walked in, the museum was bustling with people, with puddles scattered throughout the tile floors. The crowd felt overwhelming, but the lobby of the museum still looked lovely. The staff worked to organize the chaos as we checked our coats and moved to the second floor in a herd of people.

My first favorite part of my visit was an exhibit called, “The Value of Good Design.” After learning about exhibit design during my undergraduate studies, I felt a deeper appreciation for the narrative in this space. The Value of Good Design argued that functionality can be beautiful. It focused on product design throughout the 20th Century and the individual stories that sparked the creation of certain objects. I realized that putting this exhibit together must have been a challenge considering all of the articles on display were three-dimensional — they ranged from salad tongs to full-sized automobiles and covered everything in between. It was much more difficult than putting a few objects in a cabinet for display and calling it a day. In the exhibit, two sections stood out to me. They had a wall featuring chair design through the 20th Century. It included the sleek modern lines from Charles and Ray Eames, as well as less practical chairs influenced by war-time materials like William H. Miller, Jr.’s Chair (c.1944). I loved that the curators organized the furniture, among the other pieces on display, because they nearly resembled a showroom. Each chair was given enough space to be appreciated but was accentuated by lighting, rugs, and other assorted furniture to tell more of a story. Each area had a large card of information explaining the section as a whole, followed by each item having its own card to learn more. It was engaging, educational, and felt like a breath of fresh air among the large crowds of people in the museum that day.

Upon leaving that particular exhibition, we were pleasantly surprised with an interactive portion featuring children’s toys and products from the past that also utilized good design. Aside from it being delightful to interact with several of the products to truly understand their functionality, it was also a relatively clever business decision. The items on display here were also for sale in The MoMA Store, as my boyfriend pointed out. They could afford to have these items handled by the public because they had more in stock. More to that point, it may encourage visitors to purchase these items upon leaving the museum because they created a connection with them earlier. Though we didn’t purchase them, it was thought-provoking to see both sides of the coin, as it were.

My most memorable part of my visit could be summarized as the entire fifth floor of the museum. After taking so many classes in art history during my undergraduate studies, visiting the work on the fifth floor felt very much akin to visiting old friends. For the first time in my life, I saw Vincent van Gogh’s The Starry Nightin person. Did I have someone’s elbow in my chest, and was my vision mostly covered by the back of someone’s head trying to get a picture with it? Yes. For that reason, I’m absolutely encouraged to revisit on a day much less crowded; however, it still registered as a moment of magic. It was much greener than I had ever imagined, and the detail of his brush strokes was finally put to justice, rather than just being a fuzzy projection in a lecture hall. I felt this same phenomenon when I visited Claude Monet’s Waterlilies and Kazimir Malevich’s famous Suprematist White on White. I had learned so much about the work I visited, that reading the information cards placed next to them felt more nostalgic than informative.

As I peaked around the corner, I caught a glimpse of Jackson Pollack’s Number 5. I remember feeling my heart stop for a split moment. It dominates the wall on which it hangs. It’s enormous, and for some reason, barely anyone stopped to take it in. In my old children’s book, it was black and white, but in person, it was made up of blues and warmer tones. There was so much work, raw emotion, and color put into this and I remember staring at it for several moments. I was overwhelmed and forever affected by it.

As I reflect, I can say unequivocally that this was my favorite museum experience. It was wet and messy. The crowds were too much for me to handle, and I surely didn’t love getting shoved around in the crowd for The Starry Night. The connection I shared with the collections, as well as the mastery in which they were displayed, overshadowed the discomfort I felt from the free-admission day. I will always remember my first trip to The MoMa — my only regret being that I forgot to bring my Olivia shirt with me. I’m reassured by the fact that there’s always next time.