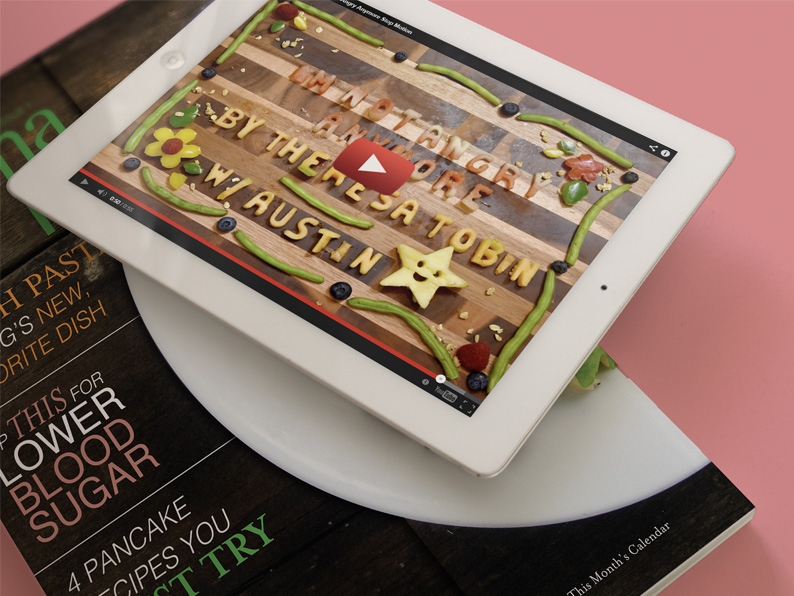 During my junior year at Drexel, I created a typographic stop motion video for my Typography 3 course. We were supposed to animate the type in a way where it interacted with sound.For my project, I wanted to make a stop-motion lyric video for an expressive and short song I already had in my iTunes library – Interlude: I’m Not Angry Anymore by Paramore. I’ve had this song since I was in high school just starting to study design. I felt like it would make a fun stop motion because of the instrumentals mostly. The ukulele is such a fun instrument and I felt like it was punchy enough to cause the text to jump around abruptly.

I chose to make my stop motion out of food because a line in the song inspired me. “I’m not bitter anymore, I’m syrupy sweet.” It reminded me of the Langston Hughes poem, Harlem, when he writes, “What happens to a dream deferred?…Does it stink like rotten meat? Or crust and sugar over – Like a syrupy sweet.” I desperately wanted to make that section appear sickly with bright frosting and candies. Interestingly enough, when I was in the process of shooting the video, I noticed that the color of the candies I’d placed on the frosting started to run, creating this sickly effect that was exactly what I was aiming for. It was a happy accident, but I think we find these in design often. From there, I branched out to other foods I felt would look nice placed against my cutting board background.

For this project, I find that the process is what’s truly special to me. I love the finished project, but what’s so unique is what you don’t see. You don’t see my tripod propped up in my standing shower, where my boyfriend and I shot this. You wouldn’t know we shot this entire stop motion sitting on the bathroom floor with multiple cutting boards and stencils just cutting fruit and positioning it just so. I have never in my life cut a juicy pineapple next to my toilet, and I hope I never have to again! That being said, with this project, I found an entirely new appreciation for the creative process. Sometimes I feel like that can be just as important as the final project, and it definitely tells a story on how you got there.

May 14, 2017 in 2017
Tags: 2017Interlude: I'm Not Angry AnymoreParamoreStop Motion AnimationTypography