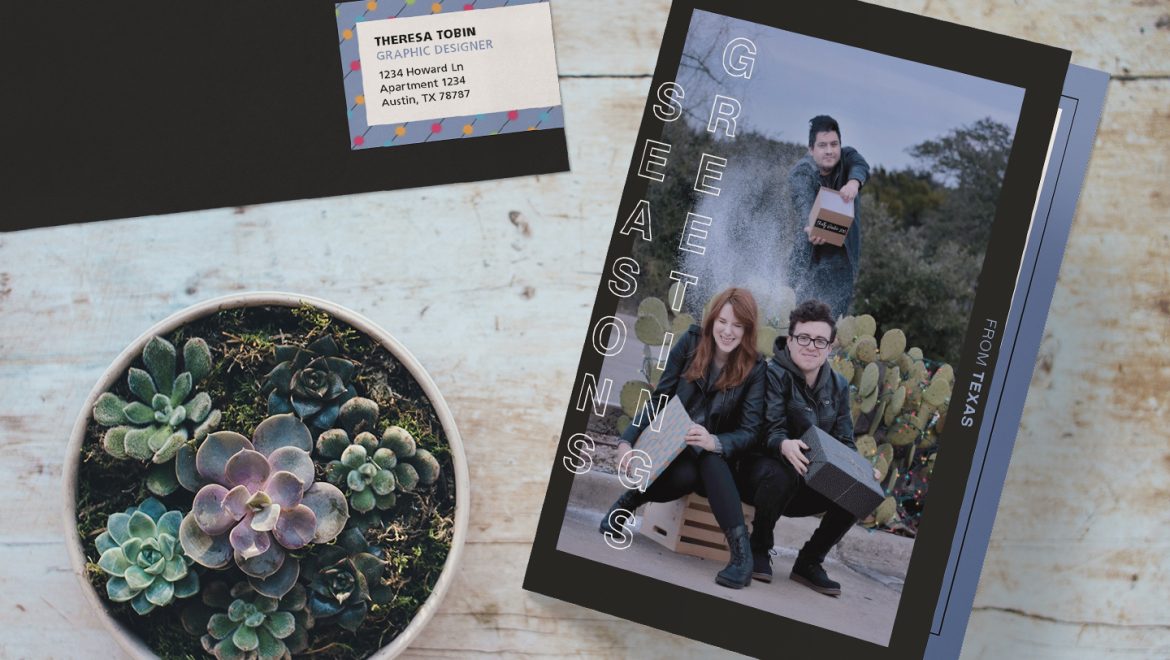 This was my little family’s first Christmas in Texas, and we were so excited. By this point, we’d all settled into a sense of stability. We each had jobs, our lives had worked their way into a routine, and we were exploring our new home inch by inch every weekend. Every year, I try to find a way to make our holiday cards seem special. In Philadelphia, we used to run out during the first snow of the season in matching outfits and take a group photo. That kind of turned into a ritual for us the last few winters; however, we moved to Austin to specifically escape the snow. I had to come up with something a little different this year.

In October, during my daily commute, I would think about the holiday card on and off. I wanted to acknowledge our major life transition to a new city and somehow also tie in the irony that we left the snow behind us. Out of nowhere, it came to me one morning. I rushed into work and took as many notes as I could so I’d remember it later. We needed to put Christmas lights on a prickly pear cactus and throw fake snow that we ‘brought with us from Philly’. I was immediately excited, and Jon and Austin were immediately exhausted. We had to find all of the props, buy A LOT of fake snow from Michael’s Crafts, and find prickly pear cactuses that were accessible, looked photogenic, and we could spend some time with.

Finding the cactus was weirdly the hardest part. We went driving down a road here in Austin and we just kept heading west. We had to find them somewhere, right? A lot of them were on private property, or were fenced off on busy roadways. Naturally, we ended up at an abandoned Sonic. Honestly, it was perfect. We weren’t in anyone’s way, we could connect our lights to the car at the perfect distance, and we didn’t have to walk out of our way. An abandoned Sonic Drive-In was the best case scenario for us.

We strung the cacti with colorful Christmas lights and posed with our presents. Our roommate, Jon, stood on top of a wooden crate with a box filled with ‘snow’ labeled “Philly Winter 2018,” and anxiously awaited my countdown. With the camera set to burst shutter, we had to get one good shot of Jon throwing the snow in the air. We had three bags of snow, yielding three total tries. He nailed it on the last attempt. The photos turned out super cute and I was excited to share this new set of cards with our families!

The holidays are always a little labor-intensive for us. I have to schlep the boys out for an over-elaborate photo, and then we spend the next three days held up in our walk-in closet fighting with the Epson printer in an attempt to make each of our loved ones a card. Getting them out in time takes some sort of magic, in itself. The process is hard, but hearing from our relatives that they look forward to it and that they love them year after year makes it worth it.