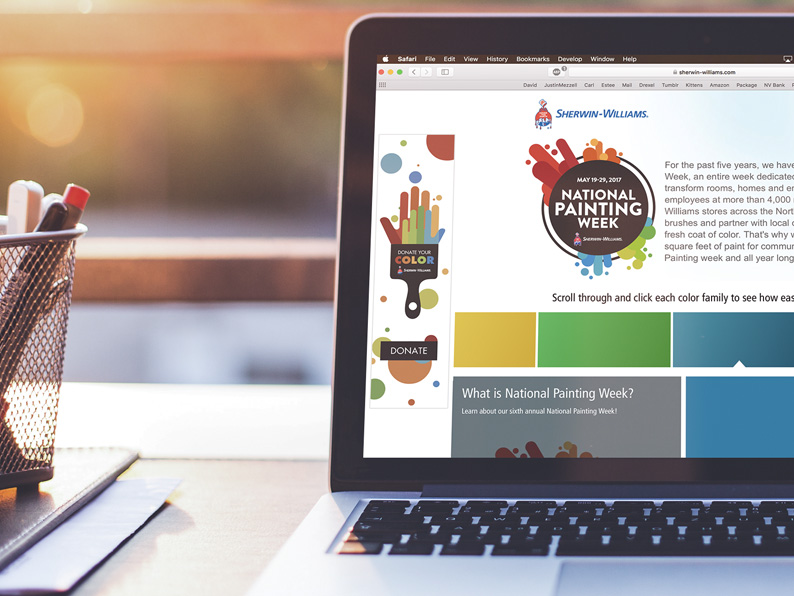 During the Spring of 2017, I was enrolled in a Web Graphics course with a focus on Motion Graphics. One of the things I learned from the class was how to animate using code from an online animation service known as Green Sock. This was interesting for me in particular because in high school I understood how to animate using Adobe Flash’s Timeline feature, but I’d always wanted to learn how to code with Action Script. Unfortunately for me, Flash was phased out and Adobe Animate was brought in. They’re both incredibly similar, but in Animate I was taught to set up my files as HTML 5 instead of Action Script 3. Something my instructor told me was that Action Script was a dying form because no one wants to download the correct player to read SWF files. That seemed as good a reason as any, so I started using his method.

For this project, we were told to make a banner ad series that could change aspect ratios based on the ad spot purchased. I wanted to make banner ads for Sherwin-Williams’s Donate Your Color campaign. It was a campaign that took place this past Spring during their National Painting Week to encourage people to donate their color (turn black and white) from their social media profile pictures, their browsers, and from their actual website. Depending on which source your color was donated from, they would donate a certain amount of sq. ft. of paint to communities in need. For their 2017 campaign they donated 10,611,198 sq. ft. of paint, so now they have employees at over 4,000 Sherwin-Williams picking up their paintbrushes and partnering up with local organizations to deliver that fresh coat of color.

For my design, I wanted to use the core colors for the campaign: red, blue, and green. However, the ad had to be 15 seconds long, and that wasn’t enough time to feature all three colors, so I had to reduce the size of the ad and only feature red and blue. I wanted a clever way to transition so I chose the roller brushes, paint dripping, and a color change effect to make it look more interesting than just having things move from side to side. I also chose the woman’s face in a photo to represent the social media aspect of the campaign, while the tablet was meant to represent the internet browsing and the website aspects of the campaign. I wanted to make the message simple and clear, while still featuring a call to action button at the end that would direct you to the website where you can learn more about what you can do to help. Lastly, the song I featured in the ads was a song Sherwin-Williams was using in their television ad campaigns, and I felt it was appropriate to use a part of it across platforms to stay true to their brand. The song can be downloaded for free on Sherwin-Williams’s website here.